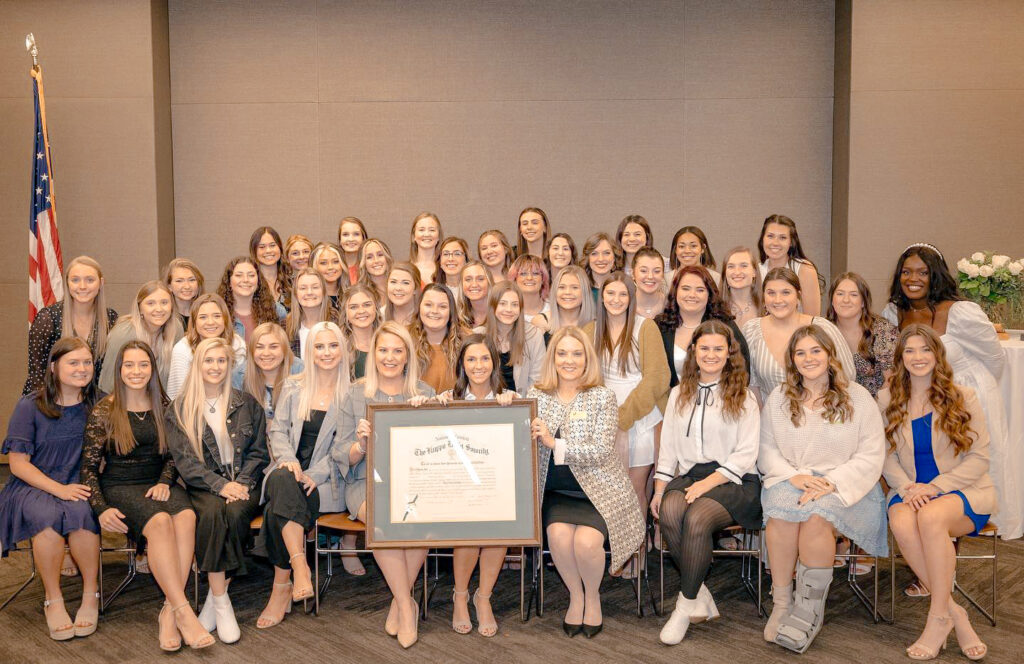 “Kappa Delta and North Georgia is a partnership that was meant to be,” said Courtney Dickey, national vice president of membership for Kappa Delta Sorority. “When the University of North Georgia Panhellenic community chose to welcome back Kappa Delta, we were honored. Kappa Delta has been anxiously awaiting our return to UNG and knew our confidence platform would complement the UNG community.”

Kappa Delta’s Epsilon Gamma chapter was originally founded at the University of North Georgia on Feb. 17, 1973, and was suspended in April 2019 with the intent to work with university faculty to reinstate the chapter in 2021 with their support. Following its initiation and Installation ceremony, Epsilon Gamma became Kappa Delta Sorority’s 168th active collegiate chapter and ninth active chapter in the state of Georgia.

“Kappa Delta realizes that an effective partnership with the university is critical to our success here at North Georgia,” said Dickey. “In September of this year, our national leadership team met with so many great women who had expressed interest in joining Kappa Delta at North Georgia. The women we met showcased the excellent students that North Georgia attracts. We were looking for a special group of women – innovators, trail blazers and creative thinkers who will define the Kappa Delta experience here at North Georgia – and that’s exactly what we found.”

The Installation ceremony, which was attended by over 130 family, friends, alumnae and university staff, included remarks from Dr. James Conneely, vice president of student affairs, Dot Meyers, alumnae experience specialist at Kappa Delta, and presentations of the Loving Cup by Kappa Delta’s Sigma Phi chapter at the University of Georgia and of the original 1973 charter by Kappa Delta National President Susan Stockton.

Throughout its lifetime at the University of North Georgia, Epsilon Gamma has initiated nearly 1,500 members. Epsilon Gamma has also earned several awards from national Kappa Delta for its excellence in membership, academics and philanthropy, and has been recognized on campus as Chapter of the Year for 10 consecutive years, 2007-2017.

Kappa Delta Sorority is a national organization for women with more than 277,000 members, 168 active collegiate chapters and 223 active alumnae chapters nationwide. Kappa Delta is active in a number of philanthropic endeavors, including the prevention of child abuse and confidence-building programming with Girl Scouts of the USA. In 2009, the Sorority created the Confidence Coalition, an international movement to promote confidence in women and girls. In 2010, Kappa Delta established International Girls Day to empower girls to reach their potential. It also created International Women’s Friendship Month for women everywhere. Kappa Delta’s national headquarters is in Memphis, Tennessee. For more information, visit www.kappadelta.org.